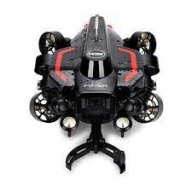 I must say, this YouTuber by the name of Erik Aanderaa did an excellent job showing off what the Navatics MITO can do. I wish the video was a bit longer, showing off more footage, but still some excellent footage.

The MITO is a lot stabler than I thought it was, I'm sure Erik used the best footage he recorded, that's always expected. But I bet the MITO is right up there with the Gladius Mini! Now which one can capture the best clearest video footage and stablest footage is still up in the air, as the MITO is rather a new underwater drone and there's not much footage up on YouTube or Facebook yet. However, the MITO definitely wins in the run time category, as it's battery is rated at 4 hours and is easily replaceable once your run out power. This is actually the first footage I've seen from an actual hobbyists, rather than just Navatics. And so far so good!

Erik did say Navatics let Erik borrow it for just testing, so be aware of that. The MITO is a grand more than the Gladius Mini, so is it worth it? Hard decision to make, considering the Chasing M2 is set to be released next month. I think if the MITO can come down in price more hobbyists would probably buy it... I think $1600 or $1700 would be more reasonable, near the price of the Fifish V6.

Looks to be a great underwater drone, seems smaller than some of the other ROVs on the market, making it easier to carry or transport, as Erik did say it came in a backpack. What's neat is the wifi buoy is solar powered, so it makes me wonder if it won't need as much charging, which is a big plus lets say if you go out on the water and want to record more than 4 hour of footage which is how long one MITO battery is rated at.

As the point I made to Erik when I commented down below, the one thing that will make these underwater drones a lot easier to control, is having FPV Goggles like the DJI Goggles. Erik did say even though the Navatics MITO is very stable, it was bit of a challenging task finding the anchor due to poor water visibility. I used an Apple Ipad with my Geneinno Titan, but even with brightness all the way up, it was still hard to pick up fish and small objects in the background on very sunny days. When I was out ice fishing, I tried putting the Titan in the water, the glare off the ice made the Titan completely unusable.

It'll all be a learning experience of us, these underwater drone companies, as I always say the technology can only improve from here on out. I think sonar is going to also make it much easier to track down fish and objects that are in the water, in Erik's case his anchor. I know Geneinno is planning on releasing sonar capability for the T1 soon!
Last edited: Jul 13, 2020

Navatics did end up dropping the price on the Mito, it is now $1700 which is more reasonable!
You must log in or register to reply here.
Top